Some New Zealand Mathesons, including members of the Clan Matheson Society, have written their family stories.  If you know of any more please let us know.

You can find out which libraries hold these books by using the New Zealand Libraries’ Catalogue, and if necessary use your local library’s interloan service to borrow a copy.  Some of the titles are still available for purchase.

Answering the call — Colin Matheson in the First World War

The centenary of the First World War has stimulated a lot of interest in our family members’ experiences during that time.  Almost everyone in New Zealand today has relatives who went through this period of global conflict, whether as servicemen or women (in the service of New Zealand, our allies or even those who were then our enemies), or those who stayed at home but lived in a very different society. 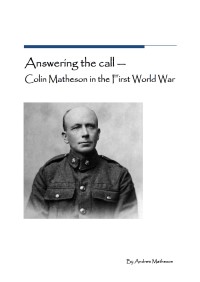 This book is an example of how ordinary family stories illustrate the world’s first global conflict.  It tells the story of an unlikely soldier of the time, who in his forties was called up and trained to fight.  Andrew Matheson recounts a detailed narrative of his great-uncle Colin Matheson’s wartime experiences — training in New Zealand and England, and combat on the front line in France.  He draws on the surviving letters and diary written by Colin when on active service, letters written by those with him and sharing similar experiences, and on official records.  It is the chronicle of an ordinary man sent to do extraordinary things, who answered the call to duty to the very best of his ability.

By ‘Chance’ to Victoria: John and Elizabeth Matheson, Christopher and Ann McRae and their descendants, 1800–2001 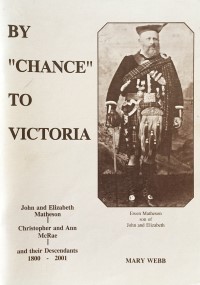 Despite the title (which is a play on the name of a ship), this book is more about New Zealand than Australia.  Like all our stories, it starts in Scotland and then describes family members’ long sea journeys to the other side of the world.  As with many of our stories, Australia was the first destination for these migrants, but the heat and hardship of the dusty continent led some family members to move on and cross the Tasman.

Balclutha family historian Mary Webb has produced a thorough account of these families and their New Zealand descendants, many of whom settled at Waikaia in Southland.  There’s also a connection with Waipu in Northland, through the McRae and McKay families.

Fac et Spera (do and hope): the Mathesons of Fourpenny

Former Clan Matheson Society genealogist Monica Kidd wrote this story about her Scottish ancestors James Matheson and Helen Murray from Sutherlandshire, their migration to New Zealand in 1858, and their life in Dunedin and Milton.  The story of their eldest son George and his descendants is the focus of the New Zealand part of this book.  It’s a good example of how every family has an interesting story that’s worth recording, and how with good research and a nice way with words these stories can come alive.

Unfortunately this book hasn’t been published, and exists only as one of the manuscripts compiled by the New Zealand Society of Genealogists for New Zealand’s sesquicentennial in 1990.  You can see a copy at the Alexander Turnbull Library in Wellington.

Family historian and author Andrew Matheson recounts how four Scottish families — Matheson, McLeod, McKenzie and McDonald — migrated from the Highlands to the four corners of the earth. 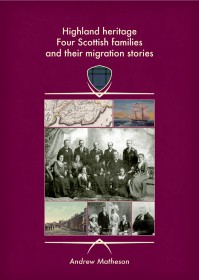 Two Scottish emigrants in the mid-19th century, Norman McLeod Matheson and Ann McDonald, travelled separately to New Zealand where they met, married, and raised a family of ten in that young pioneer country.  This book tells the story of their lives in the Scottish Highlands and in New Zealand, and spans the centuries to draw together fascinating accounts of their Matheson, McLeod, McKenzie and McDonald relatives.

These four Scottish families, who ultimately became connected in New Zealand, had members who stayed in Scotland, and others who settled in England, Canada, Australia and the United States of America.  Some worked and lived in far-away places in India, Africa and South America, while others travelled the world as mariners.  Many from these families migrated to New Zealand, both directly and with sojourns of varying lengths in other lands.

Author Andrew Matheson’s great-great-great-grandmother arrived in New Zealand in 1853, at the end of a journey of about 50 years that took her half way around the world, via two continents from her birthplace in Scotland.  From family papers, public records and oral history, he has woven together this story of ordinary lives lived in extraordinary circumstances.

Published  in 2011, this well-illustrated book of 480 pages (including references) is available for $48 plus postage and packing at cost ($6 within New Zealand) from Andrew Matheson, PO Box 10425, Wellington 6143, andrew.matheson.nz@gmail.com. 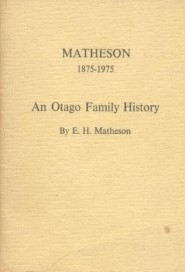 This tells the story of the Mathesons of Otago descended from Murdo and Christina Matheson of Rosshire in Scotland.  It was written by Elliot Hugh Matheson and self-published in about 1970.  The author wrote widely on this history of Strath Taieri, including about the Strath Taieri Highland Pipe Band which wore the Matheson tartan.

This book is in the Dunedin public library and the Hocken library at Otago university, and may be found occasionally in second-hand book shops.

Matheson of Kintyre is a true family effort by Neta Holme of Queensland, her brother Graeme Matheson of Rangiora and their relative Elizabeth Matheson, and it presents the fruits of research over a long period of time.

In 1972 Graeme wrote to all the Mathesons in New Zealand telephone directories to try and find any relatives of his ancestors and other relatives who migrated to New Zealand in the early 1860s.  He got one reply that had a connection.  The following year Neta wrote to a newspaper in Kintyre, Scotland, seeking information, and got three replies.  Following these initial breakthroughs and after a lot of work, Neta published Matheson of Kintyre in 1982. 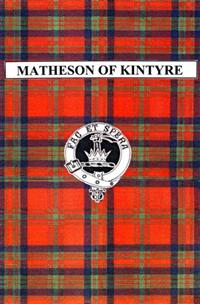 Matheson of Kintyre recounts the stories of Matheson relatives, and contains copies of original letters and photographs as well as family tree information.  The first pioneers to New Zealand of this Matheson family were Dugald and his brother Duncan, who arrived in Port Chalmers in 1863 and settled in Canterbury.

This is a good example of the stories and invaluable historical material that many clan members could produce.  As Neta said in her introduction to the first edition: “I hope this booklet will be of interest to present and future generations of Mathesons.  From this beginning I hope other Mathesons now and in the future will add to these papers, especially concerning their own personal families.  The details of a generation are lost so quickly”.

Matheson of Kintyre is available in the Canterbury Museum, on microfilm from the Mormon family history library catalogue, and the New Zealand branch of the Clan Matheson Society.  For further information contact Graeme Matheson at gmatho@xtra.co.nz.

Matheson saga: a story of foresight, courage and endeavour.  Alice McKenzie starts this account with the story of her grandparents, Captain James and Christina Matheson.  They left Peterhead in Scotland in 1858 on James’s own ship with a broad mandate: “for a voyage to Port Natal and thence as required to any other port or place in the Cape Colonies, North and South, Pacific Oceans, India and China Seas and Straits and the Australian Colonies as employment may be found”. 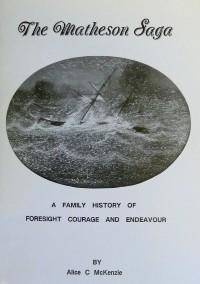 This adventure took them to Africa, Mauritius (where their son John was born), Australia, and finally in 1861 to Port Chalmers just as the Otago gold rushes were under way.  After a period running a shipping line James took the position of harbour master at Kakanui just south of Oamaru, where he also set up business as a merchant.  James later became a fellmonger (dealer in hides and skins) and wool scourer.  The family business developed and branched out into venison and property management.

Clan committee member Wayne Matheson of Queenstown is a descendant of Captain James and Christina Matheson, and contributed to this 1990 publication — which is a good collection of stories and pictures that preserves an important part of Matheson heritage in New Zealand. 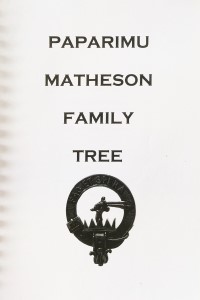 Clan Matheson Society stalwarts Graeme and Robin Matheson, and Keith and Shirley Matheson, researched and compiled this account of the Matheson family who have lived and farmed in Paparimu and nearby Clevedon (south of Auckland) since the 1850s.

It contains valuable copies and transcripts of original material, including a diary started by James Matheson in Scotland in 1848, and letters from the 1860s. 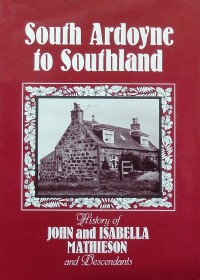 A story of Southland kin is told in South Ardoyne to Southland — history of John and Isabella Mathieson and descendants.  John was born in Oyne in Aberdeenshire, and with Isabella departed Scotland in 1883 on the Forfarshire.  They arrived in Port Chalmers in June 1883, and settled in Southland at Woodlands and later at Forest Hill.

This account of the couple and their descendants was compiled by the John and Isabella Mathieson Book Committee and edited by Tony Harris, and was published in 1985.  It is an important part of our clan heritage in New Zealand.