This Anzac Day sees a new section on the Clan Matheson New Zealand website about New Zealand Mathesons who served in the Second World War. Telling their stories is a large exercise, made difficult in part because the WW2 service personnel files have not yet been digitised, unlike those from WW1. 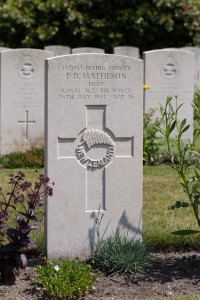 To kick this project off I’ve started with those Mathesons and Mathiesons from New Zealand and serving in the New Zealand forces who died overseas during WW2. There are 12 in all, listed on the linked page but with their individual stories told on separate pages.

Their stories are as diverse as that global conflict, and there are twists and turns in their tales. The deaths of some are somewhat mysterious, but we have a fuller account of others.
Why is someone who died in Germany commemorated in Egypt? Out of these 12, two died on the same day in the same place.

I’m grateful to those who have helped with this project, including some with family connections to the deceased. I hope I have done justice to the stories of their kin. Any further information would be welcome.