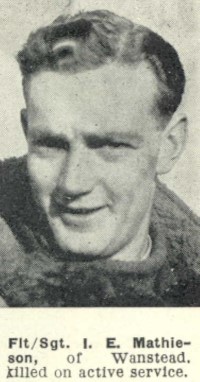 Ian Mathieson survived a long period of action as a fighter pilot in aerial battles over Europe, only to die in an accident in Britain at the hands of a trainee pilot.

He grew up in Hawke’s Bay, the son of Augustus Nicholas Mathieson and Ivy Jane Mathieson (née Edgecombe), and was working on the family farm at Wanstead south of Waipukurau when he joined the RNZAF in 1941.  After training as a pilot he embarked for the UK in early 1942, where he was attached to the RAF and flew Hurricane, Typhoon and Spitfire fighters.  In his time with 66 Squadron he flew 66 operations, which is a very high number to have survived.  His total flying time was 506 hours, also a high number to have survived.

On 25 November 1943 he was with 130 Squadron on training duties at RAF Heathfield in Ayr, Scotland.  After landing and while taxying along the runway his Spitfire was hit from behind by a landing Typhoon from another squadron.  The Typhoon had landed prematurely, despite red signals from a warning lamp.  A back-up red flare was used but failed to explode.  Ian Mathieson’s aircraft overturned and burned, though the Typhoon pilot survived.  Apparently it was only his second time flying that type of aircraft.

Ian Mathieson served in both 66 and 130 Squadrons alongside his brother, Russell Maurice Mathieson, who survived the war.  Ian Mathieson is buried in the churchyard of St Illogan church in Cornwall.