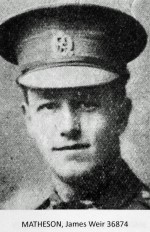 James (Jimmy) was born in 1892 at Woodlands in Southland, the eldest child of John Matheson and Margaret Matheson (née Alexander).  After leaving school he began working for Dalgety & Co to be trained as a woolclasser.  Like his younger brother Alex, James joined the army in 1916 and ended up serving in the New Zealand Rifle Brigade.  James left New Zealand in the 21st Reinforcements and after further training in England saw action in Europe.

He was killed on the blackest day in New Zealand history — 12 October 1917, when an ill-conceived and ultimately futile attack on Bellevue Spur to capture the village of Passchendaele resulted in 845 deaths and more than 2,700 wounded.  Like may of his comrades, James has no known grave and is commemorated on a memorial at the nearby cemetery of Tyne Cot.