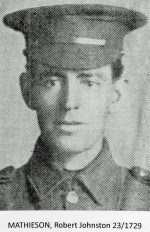 Robert Mathieson was born in Dunedin in 1885, the son of Robert and Elizabeth Mathieson.  When he joined up in 1915 he was working as a trimmer, and living in the Criterion Hotel in Napier.  He left for overseas in January 1916 and served in France, for at least part of that time as a cook.  He suffered shell shock in July 1916 and was wounded in action in September of that year, after which he was evacuated to England where he spent some months recuperating.  He was seriously ill with pneumonia and spent the first part of 1918 in hospital and a convalescent home.  He returned to New Zealand in 1919 and was discharged as no longer physically fit on account of illness contracted while on active service.  He must have returned to the UK, as he married Helen Nelson in Paisley in Scotland and seems to have settled there.