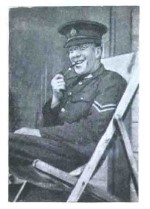 Graham was the son of William Brooklyn Matheson and Annie Elizabeth Speedy, of Tiratahi, Eketahuna.  (Annie’s mother was Emily Groves, and both the Speedy and Groves families were well-known families in the Tinui/Castlepoint areas east of Masterton.)  Before enlisting Graham was the sole school teacher at Pirinoa in the southern Wairarapa.  He initially volunteered in 1914 but was rejected as medically unfit because of eye trouble.  However he finally joined up and embarked for England on 26 June 1916.  Once he reached France he was attached to the 1st New Zealand Light Trench Mortar Battery, and along with many New Zealanders died in the assault on Messines in Belgium on 7 June 1917.  He is commemorated on the New Zealand Memorial at Messines Ridge.  This memorial stands within Messines Ridge British Cemetery and commemorates over 800 soldiers of the New Zealand Expeditionary Force who died in or near Messines in 1917 and 1918 and who have no known grave.  He is also listed on the Eketahuna war memorial and on the small Lake Ferry memorial (though with his surname misspelled).

The Victoria University College roll of honour has an account and photo of him:
“Private Graham Groves Matheson, who had volunteered in 1914, but was rejected owing to eye trouble, finally sailed with the 14th Reinforcements.  Soon after reaching France he was attached to the 1st N.Z. Light Trench Mortar Battery.  He fell at Messines on 7th June, 1917; he got safely through with the rest of his gun crew, and they had dug themselves in, but the German gun fire in the night was very heavy, and he was killed by a shell.  Private Matheson was a Training College Student, and at the time of his enlistment was teaching at a country school some miles from Eketahuna.  He was a keen member of the Hockey and Swimming Clubs.  He was taking a B.A. course and had kept second year terms.”