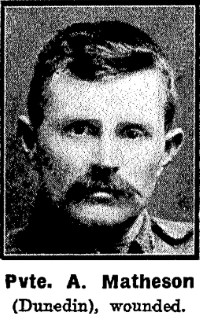 This photo from the Otago Witness of 1 August 1917 is almost certainly of Alexander Matheson of Dunedin, who received a severe shrapnel wound to the left elbow  at Ploegsteert in Flanders on 21 June 1917, and spent time in hospitals in France and England in June and July.  He was serving in the Otago Infantry Regiment.

Alexander worked as a shepherd at Rakaia, and at one time was also a member of the Freemason lodge at Fairlie.  He gave his residence as the family home Dunedin, before joining up in 1916 aged nearly 42.  His next of kin was his mother Christine Matheson, of Leith Street in Dunedin.  After being wounded he left for New Zealand on the hospital ship Maheno, arriving home just before the end of 1917.  He was discharged as no longer fit for service on account of the wounds received in action.  He died in Dunedin in 1938 aged 63.